Once mortals, the Fomorians poisoned the first with mistleberries and transfused them with the sap of winter pines, making them undead. The Dryads now carry out the ritual themselves, sometimes even persuading the living to join them of their own will - but otherwise by submission.

They prefer the shade of the forest, the gloom of winter, and the dark of night, but are not vulnerable to sunlight.

Retaining their intelligence and memories, the Bitter Dryads are the ironic, rustling voice of the  Fomorians in the mortal sphere. They are fully conscious of what they do even as it goes against anything they once loved or believed in their mortal life.

Three blasts of the Horn will strike them as instantly dead as it does the Half-Dead.

The Dryads are inextricably linked (and loyal) to the Fomorians through their weird reptilian steeds.

Dryad Horses are intelligent, capable of subvocal/telepathic communication with their rider and the Fomorians, and serve to direct the Dryads according to that greater will.

It is said that these lizard-things are vomited up by the Fomorians, fully formed extensions of their dire personality.

I first encountered the Brothers of the Pine in The Best of White Dwarf Scenarios Vol. II. 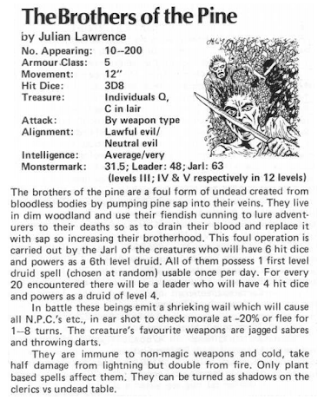 I hadn't read the Chronicles of Corum at this stage, so they were just a cool monster in their own right.

I remember being fazed by the '-20% Morale' because I thought Morale was on 2d6 not d%, but assumed it was the kind of shorthand that I'd eventually get to understand. At that stage, I thought of rpgs (and rpgs being mainly D&D) in general being a new thing, rather than something that had been around for 10+ years, and expected there to be a lot more compatibility between them than there was.

I've used the BECMI/OSE Wood Golem as the base monster for both mount and rider.

The relationship of the Pine People to their mounts was something I'd forgotten about, and I couldn't not include it.

Posted by shutteredroom at 10:32 AM