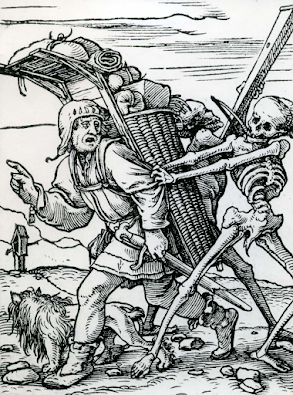 Guess what? You went on an adventure and you got killed. Hand in your character sheet and shed a tear.

But you don't have to stop playing.

Either get yourself raised from the dead, or roll 2d6/d66 to see how a new character can be introduced mid-session, seamlessly or with a great thump of deus ex machina.

There's no particular reason why the surviving adventurers would hand over their late comrade's equipment for you to use, so maybe roll on some other tables to kit yourself out.

This leans into the old school dungeon adventure type of game, but is system agnostic and should easily adapt to other settings and systems. These are narrative prompts to get you going when you don't have the luxury or will to research, hone and carefully edit a 30-page backstory.

Posted by shutteredroom at 2:47 PM