There's a genre convention (survival horror or otherwise) that The Monster is near or totally invulnerable (but only until the final act). In D&D terms, we say 'magic weapon to hit' and that's near enough.

From BECMI, Basic level monsters that you can't harm with normal weapons include Gargoyles, Lycanthropes and Wights. AD&D has 1-4 Manes demons as a 1st level dungeon random encounter.  These are all things you might have to contend with on your first delve, let alone in the recognisable modern world.

Most of the mechanics presented here have been adapted/ lifted wholesale from Night Howlers by Ann Dupuis, which allows you to play as werecreatures - though it's more heroic fantasy than World of Darkness.

Whether or not The Monster can survive being hit by a car or driven over by a steamroller or being dropped off a cliff  or shot by a tank cannon will be a judgement call.

Special specific immunity/vulnerability is just that: The Rules differ from iteration-to-iteration of The Monster - compare Buffy's Vampires to 30 Days of Night to Hammer Horror to Twilight, for example - so nothing here is absolute, just information to get things going.

As a general rule, firearms are normal weapons, from the humble musket to the sub-machine gun.

Send An Elephant To Catch A Werewolf. 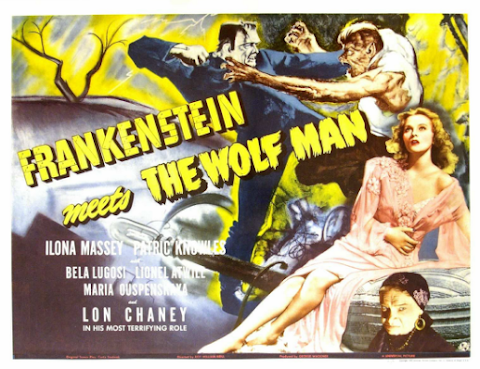 Monsters themselves immune to normal weapons or of sufficient size/power can harm nominally invulnerable monsters. My sources do not draw a distinction between natural and weapon attacks, but do stress that it's HD that count, not character levels.

Night Howlers gives the threshold as 8 HD+, so all Giants (but not all Dragons).

AD&D starts at 4+1 HD (Ogres) and then climbs the magical bonus equivalent scale.

Alongside or instead of this, >15 hp from a single source/attack (in one combat round) causes the excess in damage, and >30 hp from multiple sources/attacks. Which potentially covers monsters missed out by the HD thresholds, as well as torch-and-pitchfork mobs.

Adjust down to 10/20 hp thresholds if this suits your game better.

Falling damage (excuse me) falls into this category, too, either as number of dice rolled or damage inflicted.

Even if not covered by the HD or hp values above, boulders (catapult or Giant thrown) and siege engines could harm invulnerable monsters - I guess they are not normal weapons.

You could extend this to any devices that cause hull or structural damage, if there are such things in your system.

Unless explicitly or logically resistant, The Monster can be expected to be afraid of/vulnerable to fire, and takes normal damage from it.

As an option, successful fire attacks can force a Morale Check or block/parry/spoil The Monster's attack that round.

The Monster may overcome its fear of fire, or go berserk as a response, depending on how you see the fiction.

And, if not fire, why not acid, electricity, radiation and/or cold? These would normally be magical in heroic fantasy, but are certainly available in some form in other milieu.

Sticks of dynamite, kegs of gunpowder and/or vials of nitro-glycerine feature in the Gothic/Victorian horror setting The Masque of Red Death. Damage output is d6 per unit, with increasing explosion size. Whether thrown or just piled high and blown up, do they count as normal weapons (subject to damage thresholds), as fire or as siege weapons (capable of hull/structural damage)?

(I'm planning to cover something along these lines in more depth as a separate post, so I'll edit in a link to that when I do)

The special and secondary effects of weapons and unarmed attacks are effective against invulnerable monsters, within reason: you can't tangle a Ghost in a net, you can't drown a Vampire, you can't snap John Carpenter's The Thing's neck (or whatever it's using at the time).

Decisions need to be made about the extent of invulnerability. Can you strangle a Werewolf, or would you have to use enchanted gauntlets to do so? Is a monster immune to poison gas because it does not need to breath at all or because it is unharmed by the toxins? What if instead of poison gas, it was dunked underwater? If shot with a tank cannon, does a Manes demon take no damage from the missile but get thrown back/ knocked over or does it bounce of them/ drop to the ground?

Hercules throttling the Nemean Lion is a guiding precedent.

In an abstract hit point system with few special/secondary effects, you could use subdual damage - although I'm not entirely sure whether or not you actually can beat (say) Pyramid Head into submission, or what you would do with them if you could. 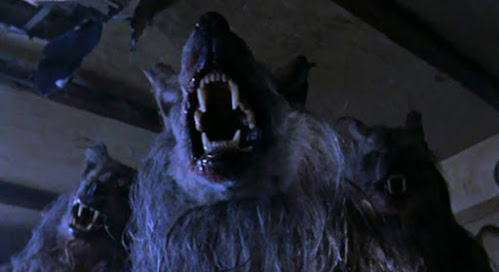 This film is an extended example of fighting invulnerable monsters that illustrates a lot of what I've covered here - to answer or raise questions.

Silver is still the traditional vulnerability, but (spoiler) this is backed up with a head shot, raising the possibility that The Monster can be rendered vulnerable to normal weapons, to be dealt with using more traditional fantasy rpg violence.

Werewolves are punched, scalded with boiling water, struck with frying pans. They aren't killed (no damage), but they are affected - call it a stun or a blocking of their attacks in game terms. Same with a camera flash, it dazzles them but does no equivalent of hp damage.

They survive being impaled on a normal metal sword. And there has been discussion as to whether a limb is severed - though what this means in our context, I don't know (unless these Werewolves are Trolls).

They survive sustained automatic gunfire, which may or may not have been enough to beat the 15/30 thresholds. Do you measure damage output as each bullet being a single attack, the gun being a single source, the burst being a single or multiple source?

Are the Werewolves taking no damage or minimal damage from gunfire? Because (spoiler) they're all killed when the house is blown up, so maybe it was just that there weren't enough dice being rolled.

How Does Invulnerability Work?

Some pseudo-scientific terms for how immunity to non-magical weapons (etc.) manifests. Sci-fi and superhero sources are handy for things like this if you want to extend it.

Trying to root The Monster too much in reality will lead to plot holes and heated debate. How does Superman shave? Which midnight should a Gremlin not eat after and for how long should they abstain?

This probably won't crop up in survival horror scenarios, but it derives from what I've been thinking about here.

Older edition D&D titles for 4th and 8th level Fighters, approximately matching the HD qualifications given above. I can't say if that's design or coincidence.

Heroes can hit monsters that are otherwise immune to non-magical weapons, as if they were armed with a +1 weapon; Superheroes as if with +2. This gives no bonuses and does not stack with any actual enchantment - it's just about what you can hit whether or not you are armed with a magic weapon.

Use for low-magic settings and/or systems where you think Fighters get a poor deal.

Raises the possibility that a weapon might take on some enchantment from the heroism of the bearer, so the number of random +1 and +2 swords in a setting is related to the number of Heroes and Superheroes who have passed away or invested their arms in others.

Posted by shutteredroom at 2:49 PM