They come in three sizes (3+1, 4+1 and 5+1 HD varieties, though described generally as big as a pony), and can be trained as mounts by the kind of humanoids you'd expect. They have a frosty breath weapon (d4 damage per HD).

The AD&D Winter Wolf (MM) has 6 HD and its breath weapon scores 6-24 hp, so Ice Wolves are just the Mystaran variant.

It might just be clumsy editing/writing, but the text describes them as huge hounds so maybe they had a different name at some point close to publication. I wonder if there's any relation to the Hounds of Kerenos as statted by Graham Staplehurst.

Giant jellyfish if you need them. I have trouble visualising a standard combat involving them vs. adventurers - even though the text makes clear they use their tentacles as an active attack.

Two types, the Marauder and the Man-o-War. The Marauder is mechanically identical to the largest (4 HD) Portuguese Man-o-War, Giant from the 1e MM, though its sting is weaker (+4 to save).

They do make it into the 2e Mystara supplement, or rather the Marauder does, joined by the Death's Head (it's got a skull pattern) and the Galley (a fast swimmer and a deadly surface combatant, which can also shoot a stream of venom).

They have a basic save of 4+ (Stone) or 5+ (Wood, but auto-fail vs. magical fire), and carry their treasure inside.

I know I once had plans for undead-infested Juggernauts, along Triumph of Death lines, with names expressing their themes (Puzzlebox, Skinning Parlour, Flesh Foundry, Bonemachine and Ziggurat are the only ones I can remember).

Some sort of Air Elemental that haunts the seas, making mist and mischief (of the ship's crew slaying variety). A real danger to mundane sailors who lack the HD and magic weapons to have any sort of chance against them.

A minimum of 10 Kal-Muru are needed to generate a thick, obscuring sea-fog, and the more of them there are, the further it spreads. As well as being unaffected by the winds, the fog also induces confusion (save at +4 if 5 HD or more, no effect at 8 and above).

Keep them as elementals, make them undead or demonic or djinni - whatever you like.

Featured in module X8, with the Kara-kara, below.

If you think Orcs are racist, then get ready for the Kara-kara. Not only Orcs, but also a caricature of the bone-through-the-nose-cannibal-savages-of-the-tropical-isles.

Even so, for a tribal humanoid with some trappings that have not well stood the passage of time, broadening of audiences, and evolution of attitudes, the Kara-kara are... okay monsters?

CC gives us a description pretty close to what you can see in the pic above, and there's the standard tribal monster notes on females, young, weapon choice/distribution and spell-casters. In this case, they're known as manwu-papas or witch doctors - preferring the reverse of Cleric spells, because they're Chaotic.

As well as being followers of a pig cult, they are also a singing people. I imagine them having pleasant voices (to human ears), far from the presumed gutturals of Orcish. The males have a battle chant which gives a non-magical boost to their Morale and hit points, and makes them equivalent to 2 HD monsters when dealing with certain effects (sleep spell is the given example). Presumably, there can be other songs.

They consider precious metals to be worthless (no good for making practical implements), but pearl and jade can be found in their treasure hoards.

They're the feature-creature of module X8, so that's their context and expanded background if you have it for reference. As far as I know, they don't turn up anywhere else.

2e says that this is the Mystaran Hangman Tree (MM2). 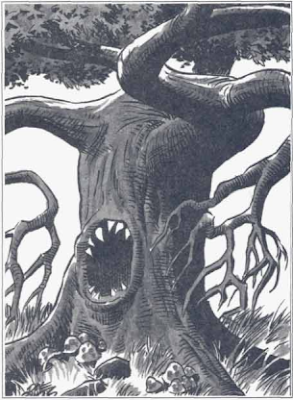 RAW, the Killer Tree is a 6 HD monster with 4 grabbing attacks, followed by a 3d6 bite - a lot less subtle and Tolkien-adjacent than the Hangman Tree. And look at that maw.

I'm fairly sure these are the BECMI/Mystaran analogue of the Locathah, though the Kna are orange rather than yellow, ride Mashers (the higher HD version in the M section) rather than giant eels, are enormously strong if their +5 to damage is not a typo (it's in AC9 earlier, but there's no comment on Strength or a damage bonus when they appear in 2e) and are 10 to 12 feet tall.

I'm not specifically saying that the Locathah (or the wider aquatic tribal humanoid monster family) are boring, but this really feels like someone decided they could do with a zhuzhing-up.

Apart from that +5 damage in the statblock, there are no mechanics - the text is pure flavour; culture, technology, habitat, that there are both peaceful traders and ship-wrecking pirates amongst them. It is this that makes it (for me) a monster worth thinking about.

They can't breathe air, which I think is an interesting touch. Intermediaries or magic if you want to trade with them (maybe the Aquatic Elves are really keen for the Kna to join the community of intelligent humanoids and that's why they make and trade potions of water breathing).

2e tells us that Kna is pronounced NAH, that the wrecker-pirates call themselves uyagh and the Kna have a special body/sign language (in addition to a spoken one) that can get across basic concepts. Some details on family and tribal composition (including tame sea animals/monsters), claw and bite damage, infravision, half damage from blunt weapons (rubbery skin), +1 save vs. normal fire, how long they survive out of water (2d4 rounds). And that they're the sworn and ancient enemy of the Kopru (next monster).

We also learn that Kna blood is an ingredient in potions of water breathing, which could put those Aquatic Elves mentioned earlier in a whole different light - the haughty, magic-using Elves taking a blood tithe from the beings they see as primitive brutes, perhaps, and the uyagh are those who would not submit (or survivors seeking revenge).

Described as amphibians, but maybe just amphibious (and restricted to hot springs and tropical swamps): facial tentacles around a sphincter mouth, humanoid torso, clawed arms, three fluke-like tails instead of legs. They will bite you for 1d4 hp, but can also crush you in the coils of all three tails for 3d6 (doesn't specify if this is auto-damage/constriction).

Their signature weapon is a powerful charm - save vs. death ray (which means it's an easier save than vs. spells, unless I'm mistaken) or you are now completely loyal to the Kopru; it can read your thoughts and knows your memories, as well as direct you at any distance. Not only that but you will work in their interests even without direct orders, and will also carry on as normally as you can to disguise your allegiance.

Fortunately, if you make your save (or throw off control - check each month; or apply dispel magic etc; or kill the controller) you are no longer subject to charm from that Kopru or the rest of the same group (this is not further defined).

They're one of the feature-creatures of X1 Isle of Dread, and one of way of reading things is that the (two? three?) Kopru you encounter are the only ones left.

I've always felt the Kopru were conceptually and/or thematically in the same kind of monster category as Mind Flayers, and not just because of the facial tentacles (as a matter of fact both the CC Kopru and the MM Mind Flayer have 8+4 HD, checking now). 2e goes as far as to venture that kopru are related to mind flayers as mermen are related to humans.

2e gives them a claw/claw/bite and more detailed tail(s) attack. The charm is further defined to include the victim being completely unaware that they are being controlled, and the effect is permanent until dispelled. Some notes on families/eggs, that they are female led, that their charm-related mind-reading is possibly a vestige of their past psionic ability at the height of their civilisation.

What it lacks in intelligence and special abilities in comparison to the 1e MM2 Kraken, it makes up for with 64 HD and almost 1000' of tentacular monstrosity.

You need to score 60 hp to sever one of its tentacles.

Posted by shutteredroom at 3:56 PM