Occasional and non-affiliated reminder to check out the Monster Man podcast (and/or support on Patreon), because monsters are great. I started years late so I'm only up to D in Monster Manual II (3rd season), but looking forward to eventually catching up to a look at the CC (whether AC9 or DMR2 edition) and seeing where thoughts con/diverge, and hoping for some segments of surprise.

A typically extensive S section, which I've split it into two for easier digestion.

Oh, and sometimes there might be 5 of them. And they can see invisible, ethereal and hidden creatures and objects with truesight.

Mechanically, that's the Saberclaw (Sabreclaw in AC9). Intelligence of 2. If that was all you had to go with, you'd be thinking maybe something from the first printing of Deities & Demigods.

Narratively, it's a nasty greasy hairy winged monster (conjured from befouled waters) with a large bone extension that resembles a sword on its right arm - y'know, a scimitar talon, a rapier nail, a katana paw, something like that.

Number Appearing is d100, and they're sub-divided into wings of 1-20. Each wing shares total hp of (25 x the number of Sabreclaws), with the complication that no individual dies until all those hp have been depleted. They save as Fighters of level x5 the members of the wing.

Anyone faced/used them in a game (CM3 or DIY)? How did that play out?

This is a Mimic, with a range of Intelligence (1 to 9) and it might be friendly, it might not, because it's a Mimic. It even has the same eavesdrop-and-gossip characteristic.

Apart from the name and the flat 10 HD, the main difference between CC and MM is that the Scamille get 6 attacks per round (only one of which is sticky) for 3-18 hp each.

Surprisingly, the Scamille makes it to 2e as a monster in its own right, and is a relative of the Ochre Jelly with no stated connection to the Mimic despite it being a Mimic, though with Average (8) Intelligence, not a range.

An odd choice to carry over into 2e.

A 1 hp monster with save-for-half-damage venom; a hazard when searching or a trap vs. looters.

You could use this statblock for any other small venomous creature.

The favorite steeds of mermen and tritons. Of course.

Their body is not described beyond being 15' in length, but they have the head of the horse and some are coloured after land-dwelling horses.

They have approximately the same stats as the AD&D MM Sea Horse, Giant, but the description sounds more like a Hippocampus.

Basic and functional; snakes/serpents are an absolute foundation monster IMO.

Can constrict vessels for hull damage. I like the illo, too.

Flesh-eating plant with d6 stalks, each has 9 HD and a 2d6 bite attack. The name says snakes, but description could suggest Little Shop of Horrors.

Main body/root is underwater (habitat is swamps etc) and has to be burned (somehow) to kill it, or severed stalks will have grown back in 6 months.

Is there a non-giant Serpentweed? I can't find one, and the plant with that name in the real world isn't anything like this.

A hairy little elemental/fairy-folk guardian/spirit of the woods. Wield silver daggers or bite you in combat.

Kill it and the 24 mile hex of woodland it is tied to becomes cursed and infertile for a folkloric seven years (unless a Druid casts remove curse - BECMI/RC Druids being Clerics with a few extra spells and restrictions). Equally, should the Shargugh be forced to leave its home, it will sicken and die in one or two days.

Ability to transport via plants in its territory, hide like a Halfling, move silently and pick pockets. Mentions that woodland folk leave it gifts of food and drink to discourage it from robbing them, but I'm not sure if this is elves-and-pixies or charcoal-burners-and-lumberjacks.

No guidance on pronunciation, until 2e (SHAR - guh) plus the italicising of its transport via plants ability to bring it in line with the spell. The usual stuff about family structure and lifecycle.

Three feet long with 6 HD, they bite and shake you like a terrier does (auto-damage and to Hit penalty).

Is this a fantastic animal or something real statted-up? Quick online search for the name leads me back to gaming material.

It's okay. I'd knock down the HD and use this as a Wolf or olde schoole Call of Cthulhu Ghoul.

They're not quite the Sahuagin analogue I originally took them to be, but these are scaly, fish-tailed undersea tribal humanoids that have an affinity (and empathic link) with sharks.

Normally fully aquatic and Neutral, they pose their biggest threat to landlubbers when their tribal elder (3 HD leader) dies. At this (over weeks), the Shark-kin sprout legs and their gills adapt to breathing out of water, and they then march ashore to a sacred site where they carry out the ritual that creates a new elder. During this time, they are more aggressive, as they don't want anything upsetting their transformative ritual.

Then they go back to the sea and get rid of those legs.

2e adds that they're possessive of shipwrecks in their tribal territory, which is a decent adventure complication.

The summoned warriors of the Faedornae. They're invisible and remain so while attacking, with all relevant bonuses/penalties. Wear silver plate armour and wield silver swords +1, but these dissolve along with a slain warrior.

One interpretation of the text is that the usual methods of perceiving the invisible only function for Elves with regard to the Silver Warriors. I would go with this, because I also go with Elves being vulnerable to protection from evil.

They could be styled as elemental conjurations or emanations, as they appear to be formed from the substance of a Shining Isle.

Lures using bioluminescence and olfactory mimicry, but this is not a special ability. .

If you enter the plant, it traps you - apparently with no attack roll or saving throw - and you take d4 crushing damage per round and d10 digestive enzyme damage per 10 minute turn.

Escape by reducing it to 0 hp to represent cutting away all its crushing appendages, which you can even do it trapped (but at penalty, and while losing your own hp). AC as Unarmoured and 5 HD.

Kill it by digging it up and burning the root. 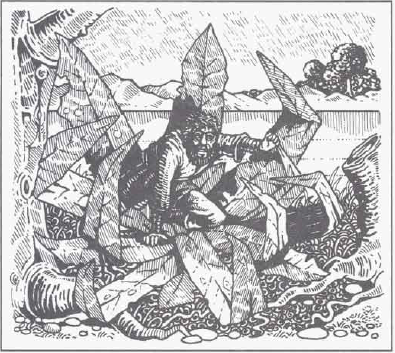 I'm not sure how it's going to threaten player characters unless they make the decision to climb into it, or blunder into it while not taking proper care. The illo seems to hint at some kind of compulsion, but this monster rather feels like a missed opportunity - it's even more of an environmental hazard/trap than many others of its type.

Lizard folk adapted to extreme desert conditions (eyes and nostrils protected vs. sand storms, heat endurance and low water requirements; they basically get resist fire, too), with a nomadic matriarchal warrior culture. Xytars are their battle mount of choice, and they sometimes join up with Blue Dragons to raid settlements. Shamans (Clerics?) of up to 8th level.

It's specified they want fine wines as part of the tribute they demand of those crossing or hoping to cross their territory.

This is one of the longest entries, if not the longest, in the CC, and the entry for Xytar is supplemental to it. I've read somewhere that they serve as the inspiration/prototype for a later monster or culture; like the Quariks, there's a lot of specific context for a monster that doesn't feature in an adventure or sourcebook.

Primarily for delivering stinky musk (Charisma is 3 until you get rid of the stench), these come in Normal and Giant varieties.

A sparse, mainly mechanical description of this giant slimy/sticky worm that can swallow you whole, and surprises you 1-5 on d6 because it's rolled around in a treasure hoard and now looks like a pile of coins, jewels, weapons and armour.

On the one hand, I like this as adaptive behaviour in the dungeon ecology. On the other, maybe the worm has a different natural habitat with a transferable ability. It feels pretty old school.

2e gives it a limit to how many victims of what size it can swallow and keep doing so, as well as a 15% chance of being recognised for what it is before it has a chance to attack. One reading of the text implies that it doesn't necessarily have to be camouflaged with treasure.

What Was Left Out - Sacrol.

All the angry dead of a particular site collected into the undead form of a big skull cloaked in multi-coloured mist - nothing concrete on size/area. Its attacks using misty tentacles: 2 per round for 1 level energy drain, followed by automatic choking damage (hit points not energy drain). Can animate dead of its original type to do its bidding.

2e gives it the upgrade of a slay living shriek. Says it's 4' across - whether it means the skull or the mist, I don't know.

One of the monsters I preferred as a simple stat block in the BECMI Master DM's book because there was more room to imagine it.

Posted by shutteredroom at 10:28 AM