The water nymph of Greek mythology and an archetype of a sort that crosses cultural milieu. The Nereid doesn't have to be female, human-like or beautiful to do the things it does. Reskin as undines, selkies, shellycoats, vodyanoi, rusalkas, mami wata and beyond.

There are no mechanics for the 'ecstasy' produced by their kiss. The water control powers are also appropriate for lots of other monsters associated with water, or even PC/ NPC elementalists and druids.

Not even a charge-and-impale special attack.

Whales deserve so much more - a whale should be a game in itself, not just some hit points and damage dice. 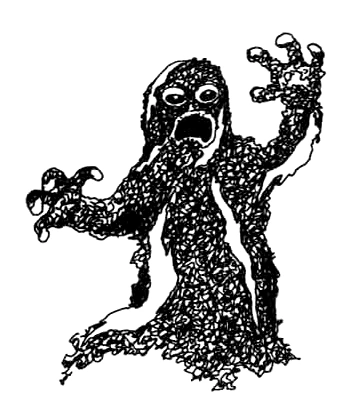 Some might think the Obliviax is a Stupid Monster. The answers are not on the character sheet, and neither are they in keeping a rigid canon when there's so much variety.

That said, I'd splice this with something else or include as a symbiote/ special ability if I wanted a monster - otherwise, it's another plant monster that's really an environmental hazard.

Underwater ogres with camouflage - I want to like them, but they could have just been a footnote to the Ogre entry.

Take them out of the water and reskin them in the dungeon/ on dry land as oversized Troglodytes and Ogres of the woods and crags. Could also use as Deep Ones, obvs.

Chiefly interesting because it can split its attacks between 4 M size opponents, 2 L size or 1 Giant size.

Otherwise, I don't like Tolkien enough to get excited about a big hairy elephant.

At first glance, a bog-standard snake person, but their venom will turn you into one of them in 2-5 + 8-16 days - you could read the entry to treat the venom as a disease/ lycanthropy if you wanted.

As written, they seem to be intended as cannon fodder minions - why not use them as the sacred monsters of the snake worshippers, or even protectors of the druid groves? 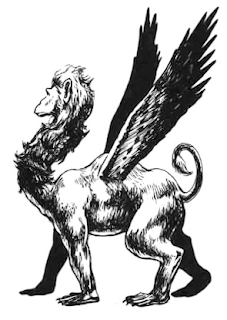 In heralrdy, the Opinicus is a type of Griffin and is a bit #BOSR. I like that the heraldic creature is described as having the head of a Griffin - how is that different from the head of an Eagle? Apparently, it scavenges the rubbish of London streets and represents the Barber Surgeons.

The MM2 Opinicus is a winged camel with a monkey's face, and seems to be planted somewhere in the 'Mythical Mystical East'. It has sun-sparkles (like the Hollyphant) coming out of its eyes.

If it's drawing on mythology or religious imagery I'm ignorant of, I will re-evaluate it, but this monster seems both powerful and silly (like the Hollyphant).

Could be a Gotcha! Griffin with these powers - not only magical but psionic and Good.

Apparently, their love of teasing and jokes 'detract[s] from their popularity'.

This entry doesn't even give a gp value for its fur, let alone have anything interesting to say.

You could easily improvise an owl without reading this entry that would be the same as this entry, but this is comprehensive and useful.

Ice, Smoke, Magma and Ooze. As interesting or not as any other basic elemental of the D&D cosmology.

Some Magma Para-Elementals have 'magical power' - does this mean they're wizards?

The Oozes have slime-barons, which conjures up a Planescape-y image combining Jabba the Hutt and The Sopranos.

Elemental/ faerie little guys with group-casting spells. Make friends with them if you need monsters of stone and earth destroyed - they're good at that.

Use as Elemental Gnomes and folkloric Kobolds/Knockers.

The big ball that was dropped here is that they're also known as 'vinegaroons' (only the Giant-sized version has the relevant ability). For whatever reason, the suffix '-im' for monsters long achieved dominance over the '-oon'.

These are giant bug monsters of the Gotcha! variety (though maybe unintentionally) - the bigger ones have more special abilities.

Like the Haunt, this is not specifically said to be or not be undead, but is more like the ghost I/you would expect if there wasn't 40+ years of D&D tradition behind the capitalised Ghost.

It has almost no statistics, and is mechanically more like an environmental hazard or expository dungeon-dressing.

The fear it causes is specified as being 'because of the superstitious awe they inspire', so maybe sceptics aren't affected.

I once read something in Dragon magazine about how they weren't likely to accept submissions of certain specific things, because the wider audience wouldn't be satisfied until the 'official' version came out.

Reskin this Phoenix as something else or distribute some of its special abilities to other monsters. A weak thumbs-up because it can cast duo-dimension once per day. I'm sorry to be so negative.

Splice with the Pyrolisk for something a bit less epic - again, this monster gets push back for being gauged for a level of play I don't aspire to.

Yes, it's juvenile - but I can't help thinking of these as spunky-cock mushrooms.

They're an immediate threat (can convert/kill in 5-8 turns), but because they have Unratable Intelligence and Neutral (evil) Alignment maybe change turns for days or weeks and use it for a John Carpenter's The Thing scenario. 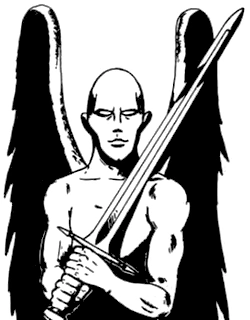 This monster thinks it's better than you.

Right from the start, I was so taken with the Pseudo-Undead that it was years until I realised they were Gotcha! monsters. They don't have the vulnerabilities of their undead counterparts, but they don't have the special abilities either (though Pseudoghasts have an effective stench).

When you start to experiment with the BECMI undead (Drujs and Odics and Death Leeches and so on), Pseudo-Undead is boggling category that doesn't entirely make sense but sparks the imagination.

For Monster Typo Top Trumps, this has 43 HD. Otherwise, it's a Gotcha! monster - being almost identical to a Cockatrice (despite the name).

I like this monster, though would likely transfer it's pyrotechnic gaze to another creature (add to a Normal Human for a Fighting Fantasy Red Eye).

It's the mortal enemy of the Phoenix, but could do absolutely nothing to harm it - doesn't even have high enough HD (minus typo) to have any chance of hitting it, either.

Let's drop the Para/ Quasi and just call them Lightning or Storm Elementals.

RAW, they're vulnerable to water attacks, but because of the treatment of elemental lightning in Dragon Warriors - The Powers of Darkness I'd group them with the Water Elementals. 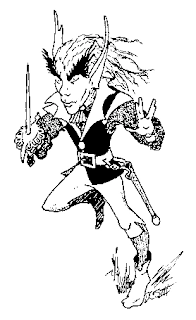 I think they have the highest Move of any AD&D monster: 96.

Their speed is so great that they talk too fast and high to be understood, and die in 12-15 years (very short for faerie folk).

They only get 3 attacks per round - fewer than the pecking beak of the Eblis - and I would have expected some kind of attack-without-retaliation ability. They aren't even guaranteed to win Initiative.

The illustration is evocative, with the ornate basket of the dagger, the moth-antenna eyebrows and the Vulcan greeting, but I think there should be more (mechanical?) depth to the Quickling - it should be the embodiment of speed, an exemplar of life lived at that speed.

Grown from a mandragora root, but whether it means the one in MM2 I don't know.

The Quickwood feels a lot more like a monster than most of the MM2 plant monsters (location/ environmental hazard). If you want to go in a Tolkien kind of direction, they are somewhere between a Treant and a Willow, Black (see later).

It's got a face, can turn your spell-energy into fear and can possess other trees - this seems to be for information gathering/communication, rather than extending its combat ability.

Give it some druid levels and make it the first higher-level druid a PC has to defeat to advance (AD&D RAW).

Posted by shutteredroom at 10:04 AM