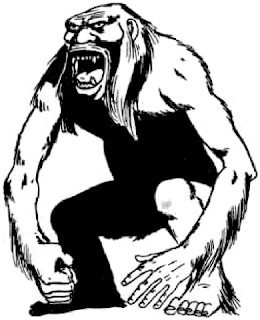 A solid 'lost world' monster - 'crudely sculpted stone idols... they might, in fact, be some kin of mankind'.

The illustration does not give any sense of its size.

I like its fear and reflection mechanics, but otherwise didn't then and don't now have much love for the monster itself.

A typo in my copy gives it 1-12/1-2 for its claw attacks, suggesting that one is teeny tiny. 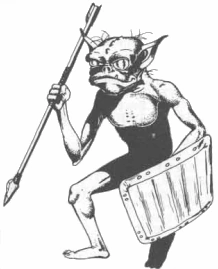 Carnivorous arboreal brachiators. A solid little monster, with relevant notes on habits and tactics as well as the wargame-y distribution of weapons etc.

They train/ keep as pets giant spiders and giant wasps - they use the wasps as flying mounts.

The Termite, as much as the Bee, feels like an archetypal colony/ hive monster. Their sprawling/ towering nests are ripe for repurposing as dungeons.

According to the entry, they can spit a blinding fluid 'similar to kerosene' - so similar that it can be set on fire. I don't know where this comes from, because the Fontanellar gun fires glue, closer to pine resin than a petroleum derivative.

Nothing to stop you having Giant Harvester Termites being the kickstart to the Dieselpunk Revolution of your setting.

The last sentence of the entry lets us know that Termites can use broadcast telepathy in a crisis, so maybe they are capable of developing psionics (as individuals or as a colony). 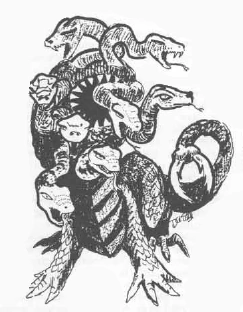 Another monster I would use in place of a Dragon, or place as the level-inappropriate central monster of a larger adventure site (see Froghemoth).

Hydra heads surround a huge mouth, and it has a tail pincer: multiple attacks, poison & acid damage, grasp and bite, spits acid, and that central mouth crunches up your items as well as your character.

Almost all the text is devoted to its killing (you or it). An unapologetic monster.

A quick internet search tells me that Thessal- has nothing to do with Thessalonians, and that there are other monsters sharing this prefix (the Thessal-gorgon, -mera and -trice).

There must be some haters out there, but that's because the Thri-Kreen have always been cool.

It says they like to hunt elves, make their own signature weapons and can dodge missiles (better than 50% chance). They're not social and there's nothing about what languages they can speak or understand.

They are barely fleshed out here in MM2, but that just gives more space for the imagination.

The Stench Kine of the Abyss.

I'd reskin as even bigger Stench Kattle and let them loose across the Lower Planes, but I'm not in charge of AD&D cosmology.

I like their fog cloud breath building up over 3 rounds, something I'd give to other big monsters - particularly those in colder conditions.

Non-aggressive sand worms that don't really do anything but knock over your tents and panic your animals.

The abilities are more interesting than the monster, though the idea of Time being an element like Air, Earth, Fire and Water is quite interesting in itself - BECMI cosmology elaborates on this.

This set of abilities would make an excellent base on which to build pseudocanis Tindalosi.

A faceless humanoid with horny-ridged suckers instead of hands and feet, and can assume a less threatening guise.

Inflicts a form of Nilbogism, that heals it while hurting those who cause it harm.

No notes on origins, habitat, society or ecology. Feels alien or horrific. 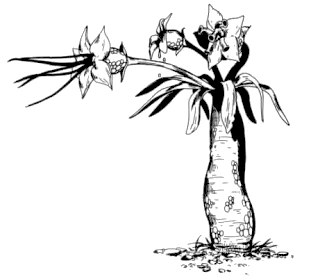 A plant with sleep, rot and vampire attacks. Gives me cone-hosts of the Yithians vibes from the start.

Give it a movement rate and set it free. Maybe even combine it with the Vagabond (see below).

I think I would play up to its 'spine covered covered body ...often mistaken for a bush' and have it look more like a shrub than a spiny sea-creature. A shrub with a saw-tongue, projectile spikes that paralyse, and an escape cloud of dark gas, with green/black pearls tangled in its root-like feet.

Or make it glow pink in the dark, like the urchins in Monsters University, or think of them more as lice or barnacles on something much bigger. 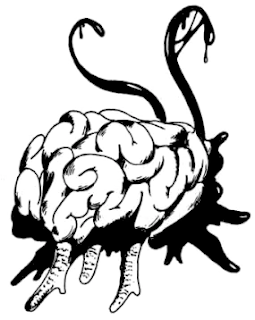 You may know them now as immature Intellect Devourers (as early as 2e), but once they were psionic mushrooms that could mess with your emotions, with that classic Unratable Intelligence/ Neutral (evil) Alignment combo.

'A vagabond is a life force of unknown origin, possibly from a far planet, parallel universe, or undiscovered plane' - they're basically the Great Race of Yith or something from Star Trek.

The description is non-committal on on whether they create their form or if they seize possession of it. They are quite keen to join adventuring parties.

They cause permanent hit point damage - something I'd only seen in Call of Cthulhu at that time, so this made them seem extra scary.

In later editions, they reproduce by your head turning into one of them and flying away - which is brilliant, and should be a viable replacement PC option.

Russet Mould turns you into a Vegepygmy, but Vegepygmies can reproduce by budding.

Though the entry states that 'they coexist well with other forms of plant life', it doesn't go into the implications of having multiple methods of coming into being, or how mould-born and bud-born regard each other.

Maybe there's an answer in later editions, or maybe I'll just make one up. Consider making them more fungoid and associating them closely with Myconids.

A fish as big as, or bigger, than the Tarrasque.

It swallows on a hit if you're 12' tall or less and dissolves you in 6 rounds even if you can survive the 2-16 hits of digestive acid damage per round. Resistant to edged weapons. Inside of its mouth is sensitive to fire (so's mine; isn't yours?). 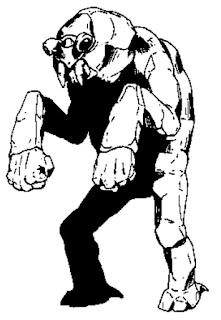 No physical description, except that it is of 'stony substance'.

It has 'the uncanny ability to physically merge with earth or stone', which is clearly intended to mean they can pass in and out of the solid substance (they live in hollows in the earth and rock), but they are only 75% undetectable while doing so - what is it that gives them away?

They are described as avaricious and keep their treasures in their hollows - which means they are able to extend their merging ability to objects they carry. It doesn't say if they can drag a living being into the rock with them.

The Vilstrak is illustrated - both with the entry and at the front of the book - and I read it as having a third eye; maybe this is the one that allows it to see out of the rock when it's in there.

Vultures with vaguely human faces, and not much more than that. Might be in the mix with Harpies and/or Vrock, but otherwise these are a single flying Hit Dice. No connection with Vultures beyond appearance (and possibly implied habits).

BUT - I find that there's so little here that I can't help wondering what they could be.

Giant and Ordinary ones, but not as big as the cage-carrying one from 1981's Clash of the Titans.

Driving them off with blows or the threat of blows is baked in.

Posted by shutteredroom at 2:55 PM