This statblock also covers mink, ferrets and stoats, according to the text.

Because the AD&D Weasel has no special abilities, this could just as easily be stats for a Giant Rat.

Feathered winged arachnids that tangle you in strands of webbing and inject you with their eggs, which rapidly hatch - the larvae eat their way out of you.

Though specific to the Webbird, there is the basis for a swarm subsystem here. Their attack is rolled on d6, with a bonus for No. Appearing, and read against a table - only 1-3 is ineffective, and on an 11+ everyone in the area of effect is entangled. Even a bare-handed hit is an instakill on them, though they always give you a dying bite. Carrying a flaming torch means you are safe from attack, because they will avoid you.

Feels like a Gamma World monster. Could also just reskin as undead crows or something.

I think I'd go in a 'lost world' direction with these - 'they know how to use fire'. Or they could only appear in the dream-world, never the waking.

An evil tree that eats people after putting them to sleep.

Says nothing about whether they like to eat hobbits halflings, but that they relish 'elves, gnomes and humans'.

I didn't dislike it, just thought it was a weird and probably a Pun Monster (like the Wight Dwarf, of course). It grew on me over the years due to this immediate weirdness, and I know its pedigree now.

Sometimes regarded as a Stupid Monster.

Not sure if they're specifically a Gotcha! monster, or a logical progression of the Jackalwere, or based on something from folklore (wolves turning into humans as much as humans turning into wolves).

They sing, though this is here mentioned only as an attack form (slow). 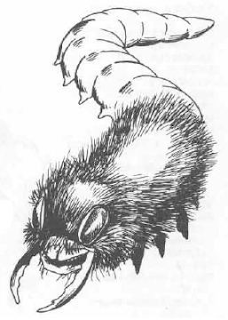 The larval form of the Gloomwing.

The largest part of the entry deals with its poisonous bristles, including the % subsystem to work out how exposed you are to them. The poison is old school - save or die (though with an onset grace period of 1-4 rounds - minutes in AD&D).

Tenebrous Worms 'inhabit most of the Plane of Shadows, though they are more common in forested areas' - does this means the forests of the Shadow Plane or forests when they are not encountered on their native plane? I like to think both.

When it bursts out of the tunnel wall and grasps you in its mandibles, it chews through your armour and inflicts automatic damage.

Causing 15+ hits with fire or reducing its hp to 40% of total will drive it off - I feel like these kinds of thresholds should feature for more monsters, as complement or alternative to Morale. 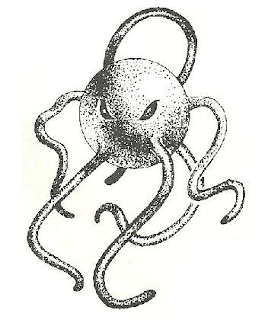 Their (near) anagrammatical names aside, the 'silver and fiery' Xag-Ya and the 'black, lifeless' Xeg-Yi are solid alien/ sword-and-sorcery monsters.

If the two opposites meet, they explosively cancel each other out. They're psionic, too.

Because of being absorbed by Call of Cthulhu at the same time as first reading MM2, I also think of the Xag-Ya/Xeg-Yi as being bubble-organ-units of Yog Sothoth superentity.

A bit of a dud, because it's basically a Xorn - it feels like someone forgot to put the 'eat magic weapons to gain hp' and 'how much metal etc. to satisfy its appetite' in MM1 and making a new monster was the only way they could think to fix that.

Consider making Xorn and Xaren interchangeable, but some might get a kick out of treating them as the Big Endians and Little Endians of the Lilliput and Blefescu of the Earth Elemental Plane.

A local (Devon, UK - where it's the headless-dog ghost of an unbaptised child) name for the 'Black Dog' entity. Because this is AD&D, it gets statted up as a standalone-but-generic dog-monster.

Their two main special abilities are to suffer damage only from the magical pluses of a weapon (or 1 hit from a silver weapon) and a 'ghastly baying' that causes panic (save or flee, no other details).

Yeth Hounds run with other creatures as part of a hunt, and their baying does not effect those who hunt with them - it is not specified whether this is a function of the Yeth or the companion. Night Hags and Evil humans are mentioned.

They prefer to eat the flesh of 'demihumans' (so dwarves, elves, gnomes and halflings) and Brownies.

In the first 5e game I played in-  first D&D in about 20 years, a (PC) Tortle Warlock asked to marry me (actually, anyone and everyone) because there was a ceremony that would give us both AC bonuses if we did.

Anyway, if a Yochlol does not take a mate, it has an AC of -10 - this is not elaborated on further, and I now wonder if this is something that was cut. There's nothing to clarify this in the entry in the 2e Planescape Monstrous Compendium 2 - it looks like it was dropped completely.

A stinky gas that can turn into 'an amorphous column' or a Giant Spider or a 'beautiful human or elf'. Has psionics and a d10 Hit Dice (rather than a d8). Slight brush of the Cthulhuvian to them.

Doesn't go into their relationship with Lolth in any depth. It doesn't say it in the entry, but give them basic Drow abilities when they were in elf form - at the least.

"Great Shades of Arthur Machen and Robert E. Howard! It's the Serpent People!"

Season to taste for your setting - I have them as multi-generational cults, based on the 80s 40K Genestealers (the Great Old Ones or the Snake Demons are their Tyranids).

Their lairs are largely wheelchair accessible.

They're the result of energy drain (animate dead afterwards is not specified) so maybe they could also be hanging around lairs with Wights, Wraiths, Spectres and Vampires - Strahd made his own zombies, but he's a major character and a spell-caster.

If you were bamboozled by AD&D's profusion of polearms, this entry tells you that both the bardiche and voulge are 'cleaving weapons'.

Zombies with more hit dice and damage dice - animate dead Bugbears rather than Giants for economy.

With a name like this and its signature special ability, this could easily have been an old school He-Man or She-Ra figure.

Monster bear that can take on the AC and damage bonus of its surroundings and your equipment.

More spunky-cock mushrooms! They even have '"milk"'.

While it says the host is only 'occasionally a small humanoid', I take the text to mean that this is the case 'in the wild', and that adventurers are not specially protected by their size.

That's not your lot, yet - I'll try and follow up with some overall thoughts and observations.

And a reminder to check in on some other monster surveys:

Posted by shutteredroom at 1:59 PM