Link back to a D post with Dragons in it...

It's got 1+3 HD, so it's tougher than a Goblin, Normal Human, Orc and Hobgoblin.

The other weird humanoid/stork monster of MM2. They have Illusionist characters that dance to cast a limited number of spells.

Make 4 beak attacks per round (fast!), and have resistance to fire because they're so damp (they live in marshes/ swamps).

Use instead of the Ogres you rolled when entering a swamp hex.

Use as intended, or as an otherwise relatively unaggressive giant cave worm/slug.

The grugach are a bit Ewok-y. They're angry little elves that set traps including deadfalls that hit hard as fireballs and pin the victim if they survive.

Valley Elves are 'World of Greyhawk'.  They're as tall as humans, are only friends with Gnomes, and are accompanied by Cooshee (Elven Dogs), but otherwise they don't really justify their own entry.

With their ability to enlarge (doubling their attack power) and turn into a tree branch, there are strong faerie folklore vibes coming off this.

The description puts them in association with all the jolly woodland folk, but I'd rather make their Neutrality chilly and have them keep to their own company when they're not frightening (but probably not preying on) church-going villagers. 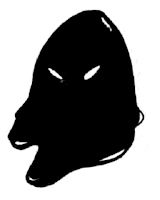 This bag-with-eyeholes monster can be up to 3' in diameter, so can fit that size of head inside them without stretching.

They're just out to kill and eat you, and the best way to get one off without harming the victim is to douse it in brandy so it falls off, drunk.

I think this would be more interesting if it was looking for a host rather than a meal - maybe it wants to get drunk - otherwise just a size and attack form variant on the Lurker Above etc.

Just as edifying as the Eagle, though with the addition that it has a 25% chance of blinding you in 1 eye with a beak hit. One of those hidden mechanical reasons to wear a full helm.

A friendly glowing intelligent bug that can shoot a beam of light from its bum for 5-20 hits and is immune to electricity and fire. They can speak Common and like to hang out with friendly folk to chat and tell stories.

Make them animals and take away that bum-beam. Keep their tolerance of humans and allow them to be used as light-sources. You probably have to find and exploit them in their home dungeon, rather than buy them from a dealer and take them with you.

Big horrible flies, probably hairy and smelly. Can bite you and jump away (you can't strike back) if they have Initiative. Hit them with a torch to burn off their wings.

Horseflies suck your blood/fluids at a frightening rate. Bluebottles are attracted to sweet things, blood and open wounds.

Shrink the bluebottle to about the same size as the Firefriend (S 1' long) or Webbird, and run it as a swarm monster, possibly one that lays eggs in your open wounds and backpacks, infesting both with maggots.

Environmental hazard/ location monster, which will have grown back if you return this way within 2-8 weeks.

I'm guessing that it eats the meat it kills, because its berries are described as 'large, plump, and delicious, being very nutritious and rich in protein'.

I've mentioned previously that apart from Bees I don't have much time for hive/insect monsters.

That Formians have a minimum Strength of 22 is quite interesting, and I suppose so is that they received an upgrade to Lawful Neutral monster exemplars in later editions. 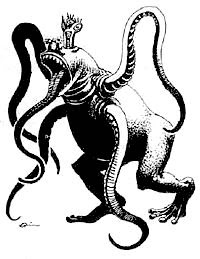 It gets a page and I think it's worth it. Use this instead of a Dragon or Watcher in the Water. It has a Gamma World and a Call of Cthulhu vibe to it - I like it's peri/telescopic eyes and nostrils.

This is the kind of monster I'd like to put at the centre of an adventure location, but not be integral to the quest (if there is one) - it's a threat to everything in the area and it's not going anywhere, so the weaker denizens learn to live with it and get around it. The kind of level-inappropriate monster you encourage another monster to fight, rather than take on yourself.

Posted by shutteredroom at 8:27 PM