Think of the Galeb Duhr as something like treants, but rocks rather than trees. They're likely not unfriendly towards squashies, but probably also not that keen to hang out with/ be disturbed by them.

Remove most of their spells or make them group efforts (ponderous, earth-shaking dancing rituals), or the portfolio of a leader type. As well as being able to animate 1-2 boulders, I'd also gift them the ability to animate 2-12 rocks as Bowlers.

They definitely sing deep low droning songs in the mountain fastnesses and leave footprints to spark rumours of giants - I don't know if this is something I read in Dragon magazine or a later edition, but feels like a good fit. 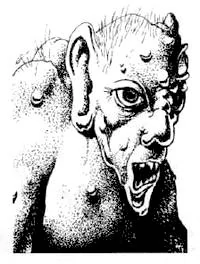 Evil ugly giants with not much to them than they can't be surprised due to their eyes, ears and noses being all over the place. Call them mutated, or possibly deformed.

Almost any other version of Fomorians is more interesting than this. I favour the mist-shrouded crude godlings of Michael Moorcock's Corum series.

Little people with great strength and tricksy giants shrinking down to human size are two of my favourite types of folkloric monster, so of course I like Firbolgs. For added tricksiness, they can cast fool's gold.

They also have the very giant-flavoured power of batting away/catching missiles launched at them, probably with a look of baffled irritation on their hairy faces.

Basically a variant on the Ogre/Giant theme, but I'm happy to see them in the mix, especially with 'notable verbeeg' such as Jimmy Squarefoot and Jack-in-Irons.

Note: I place Giants, Hags and Ogres on the same continuum - there's association and crossover, like with Elf/Goblin and Dwarf/Troll.

Another off-brand Shoggoth - 'prefer[s] to inhabit cold and underground regions' - but I still think it's a cool monster, though I'd imagine plenty of consumers/creators/players have Gibbering Mouther Fatigue by now.

It has interesting abilities in this early iteration (I've noticed that some classic monsters lose distinctive characteristics and abilities as canon is reimagined): dazzling, exploding spittle; an overbearing attack subsystem (on 2d6! Yay!) and causing confusion by gibbering.

Its ability to control the density and consistency of the ground feels underdeveloped, but I'm sure there were plenty of rulings-not-rules to weaponise it.

A giant (but not Mothra territory) black-and-silver moth the patterned wings of which cause confusion, and which produces a strength-sapping pheromone. It has a larval form later in the book (Tenerbrous Worm).

This is a good solid monster, that manages to feel both mysterious and realistic, depending on what game you're trying to play - though that could just be because I like moth-monsters.

Stats for Goats so that you can fight Goats.

Sometimes Gorgons and Chimeras have sex, just like Basilisks and Dragons, and have little Gorgimera babies that grow up to breathe fire and petrification on adventurers.

'They often dress as peasants do', so the rest of the time they don't - nudity or finery or cosplay?

Oh no! The saddest story in the book.

But you'll mistake them for Bullwugs and slaughter them.

1-2% chance of psionics; natural camouflage; tribe mother can produce a stinking cloud. A whiff of Gamma World about them. 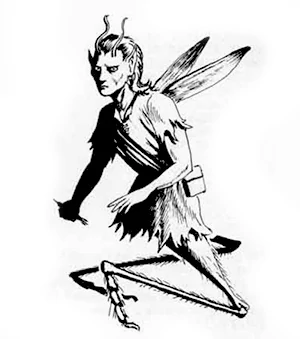 Fairly traditional faerie folk on the Elf/Goblin spectrum. I'd reskin them to not have cricket/ grasshopper legs but keep their leaping ability (little magic boots or innate power).

They're the ones that can play music that'll make you dance to exhaustion - 'Grigs can play for hours'.

Normally, Good=boring but the Grim is an interesting monster. It's nocturnal and takes the form of a big black cat, dog or owl. As it does not communicate, its presence is unlikely to be reassuring. However, it has Cleric abilities (Turning, protection from evil, detect evil) and its habits are to ward off and warn of the presence of evil creatures.

There's no preamble for this, so I suppose we're all meant to know what a Grue is, either from Jack Vance or Zork. There don't seem to be any others in AD&D but the Elemental ones here.

Each has anti-magic tied to their element, preventing the casting/function of a list of spells - whether this was to try to cover or to create exceptions, I couldn't tell you. I'd definitely use them instead of the less interesting basic elementals.

My 'favourite' attack is that of the Vardigg, the fluid brute, which sticks a tube up your nose and drowns you. It and the Ildriss (wind terror) don't appear to have a folklore origin I can easily lay my hands on. 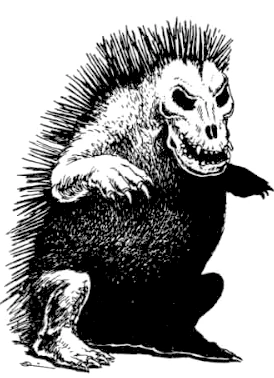 Once upon a time, I was doing my research and found mention of both the Chaggrin (soil beast) and the Harginn (flame horror) in The Imperial and Asiatic Quarterly Review 1893. They seem to be pretty much the same thing (appearing as a yellow hedgehog) - though the Harginn is also described as a great serpent capable of swallowing a stag whole.

(Incidentally, there was also mention of a Huecuvu - 'the wanderer without' - but that's Fiend Folio territory)

Posted by shutteredroom at 9:26 PM