Oh! This barely took me any time - is it because C isn't very long or are the monsters not very good?

Domestic and Wild. Cats. They're cats.

If you don't like cats, use them instead a Giant Rats in your tutorial dungeons.

Some people complained that Deities & Demigods giving hit points for the divine was just encouraging players to try and kill them. I'm not complaining in the case of the Cat Lord.

Big fish. Swallows you whole. Some potentially useful mechanics for cutting your way out.

In the same territory as the Cave/Giant Locust, with a loud chirp that drowns out speech (and presumably verbal components of spells, unless their effectiveness relies on the mouth making them rather than the ear that hears).

This feels like an absolutely appropriate -even necessary- hazard/monster for subterranean adventures.

If Gygaxian species profusion bothers you, all the abilities and mechanics could be bolted onto a generic Spider or Worm, and it could do the same from a treetop.

Because you've only got a 5% chance of being able to attack one after its attacked you, this feels more like an environmental hazard or puzzle/trap than a monster threat - a gauntlet you have to run unless you're prepared to use a mass kill spell.

Big, hungry, venomous centipedes are a solid monster threat. Not much more to say.

Megalo-centipedes have contact venom that splashes on your skin.

Serviceable statblock and abilities if you need a Cheetah or a Cheetah-like monster - better than the Bear, Northern (Polar Bear).

This kind of plant monster (like the Bloodthorn) feels like more of an environmental hazard than a monster - it's a location in itself.

For Monster Manual Top Trumps, it has 25 Hit Dice.

It's specified that they have weird, alien thought processes so only Magic Users can communicate with them. I assume they mean through spells, but why not make this a core ability of the class and then try to extrapolate why this is so?

The Cloaker's sound attack (subsonic moaning, blocked by stone) is comparable to a hummadruz, so they've also got that going for them. And they can manipulate shadows, which is always cool.

As much as I like the standard Cloaker, I'd probably reskin it as another off-brand Mind Flayer variant or a Mi Go. Or have them in underwater adventures, rather than the dungeon, as a nod to their roots in the Fafhrd/Mouser tales.

'Cooshee' seems like a brand-name toy, but it's just cu sith or cu sidhe for easy reading.

There's not much of the faerie about this. It's statblock and abilities could serve for lots of predator animals and monsters. Even makes a fair (Lovecraftian) Ghoul.

Statistically not very far from the Axebeak and the Clubnek. It's a big bird.

Not even an unexpected Alignment or surprisingly high Intelligence to catch your eye. 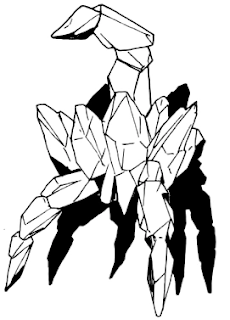 Crystal elemental, high to exceptional Intelligence, Neutral (evil) Alignment. Use them as an elemental as intended or as some kind of alien being - they've got a bit of a sci-fi flavour, and I like to think by 'sharp, rotating appendage' they mean 'drill'.

I'm starting to think that Neutral (evil) might mean something very specific that I've missed somewhere along the way.

It's 75% invisible when in the water - I'd not confine this ability to water. Maybe it becomes more visible as little streaks of dissolving paralysed victim spread throughout its clear and sloppy mass.

Where's the Cyclops, then, for them to be kin of?

Basically, Ogres with poor depth perception because of their single eye, and I'd make that a possible feature of any Ogre rather than a separate monster.

Note: Ogre as a broad monster type, rather than a species - they're mortal/mundane monsters, rather than supernatural beings. Their main features are being stronger (though not necessarily bigger) than humans and eating humans, while being humanoid themselves. Ogres can be stupid or clever, brutal or subtle, club-wielding or spell-casting - in any order and combination.

Posted by shutteredroom at 2:12 PM