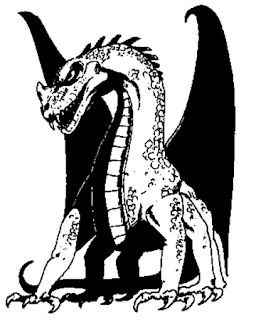 Turns out, Basilisks and Dragons sometimes have sex. Dracolisks have a Black Dragon parent, but if they tried harder maybe we could have a monster type equally as expansive as the Dragon?

As a general rule, I prefer any dragon-alternative to an actual dragon, so the Dracolisk is already on steady ground. It can't fly for extended periods - which scratches a vague 'realism' itch. It has acid spit and a petrifying gaze.

It has 'hooded eyes with nictitating membranes' making it 90% resistant to having its gaze reflected at it. This is not specifically mentioned as a Black Dragon characteristic, AFAIK, but I'm going to rule that it is. There - canon.

Description includes a mod of the 'chance of meeting gaze' subsystem, adjusted to cover Large gazers.

No mention as to connection with Basilisk, Greater; only 'basilisk of largest size' is mentioned.

To quote myself, I prefer any dragon-alternative to an actual dragon - I prefer the dungeon game to the dragon game.

Dragonfear is described as an aura, but I prefer to think of it as a natural response to seeing such a thing, and you can bolt it onto any other big/powerful scary monster you like.

Slightly out of order, but there'scrossover between the two. If they weren't created by the same person, then they were at least in the same article/module once upon a time. They're wingless, serpentine - but think Oriental Adventures rather than Vikings Campaign Sourcebook.

Both 'assume a cohesive gaseous form', making them almost indistinguishable from cloud and/or mist, though they can't make physical attacks.

The Cloud Dragon gets a long paragraph on its breath weapon, a blast of air that can blow you away, and could be reused for a spell, trap or environmental hazard.

Mist Dragons breath a cloud of misty vapours causing air-breathers to take drowning damage each round. Maybe extend this to the cohesive gaseous form.

Keep them in cohesive gaseous form as weird elementals of air and water. Give them their breath weapon even though RAW they wouldn't be able to use it.

Maybe as the familiar/companion of a particular type of villain or even player character.

Would reskin as elemental, undead or magical construct.

They prefer to walk and their breath weapon is an energy draining cloud of darkness.

They could have been, but someone decided that they should be fearless, human-hunting carnivores. Which almost makes them sound noble.

Not only do they make saves as a 16th level Magic User, they have Low Intelligence - putting them on a similar cognitive level to a great swathe of the humanoid threat hierarchy. Because of their speed, they get an Initiative bonus and, as long as they have Initiative, they are much harder to hit.

I'd consider bringing down their HD, but otherwise I think these would make an unusual and satisfying alternative to just having your countryside ravaged/your village threatened by humanoids. If you really want, BECMI Creature Catalog pun-ishes incurious adventurers by giving them a draconic breath weapon based on their colour (also works as reskins for Mi Go with energy weapons).

Some kind of magic horse, a bit like a Ki-Rin.

Sort of a confession: I usually lose interest when I see the words 'World of Greyhawk' - I don't know why. 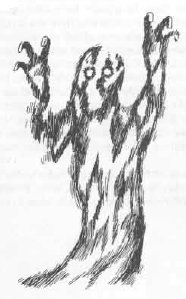 This is one of those monsters that is basically undead, but the description specifies is not. Looks just like a Wraith, if you use that kind of consistency.

There's a folklore quality to the magic summoning them only functioning from sunset to sunrise.

Drelb have 'their own strange language' and two unusual powers - any psionic power used nearby can be reflected or imitated to turn back on the psionicist, and they can advance while shrinking themselves so that they seem to be retreating. They do this when you try to Turn them.

The 'nether chill' of the Drelb's touch makes you fall to the ground shivering, unable to act until the chill passes. This is the kind of ability I like to swap out energy drain for - I'm not opposed to energy drain, but I like a flavoured ability that translates across systems, levelled or not. The entry doesn't say how long the chill lasts.

With its similarity to the Wraith, the advance-while-retreating and the slightly unexpected inclusion of psionic resistance, the Drelb is a Gotcha! monster by design but there's enough here to extrapolate from for your own canon.

Spidertaurs. They drink blood and hang out with Spiders. Because they're Drow, they have spells and might also be levelled Clerics or Magic Users.

I can't resist a spidertaur; they don't have to be Drow.

Classic wargame statblock and description - they're evil dwarves and this is how they're armed and armoured; here are the leader-types; here is the proportion of noncombatants for Paladins to prove how Lawful Good they are.

A bit less evocative than (say) the Derro entry, but there are Cleric/Assassin characters - one of my favourite multi-classes (in theory - never got to play one). They have psionics that easily convert to spell equivalents.

Molecular attraction is apparently a mis-print, so either homebrew that, or decide on whether they meant molecular agitation (heat metal) or molecular rearrangement (turn lead to gold). According to 2e, they meant agitation. 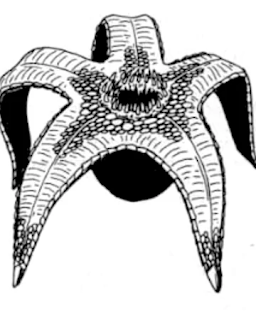 Another monster with a Gamma World/ sci-fi flavour - a giant starfish that hides under the sand and drags you to a toothy death in its own sinkhole. 20% can create an illusion of a pool of bubbling water to draw you in.

While this is a desert monster, because MM2 came out in 1983, I wonder if this 1981 John Saxon classic had any influence: 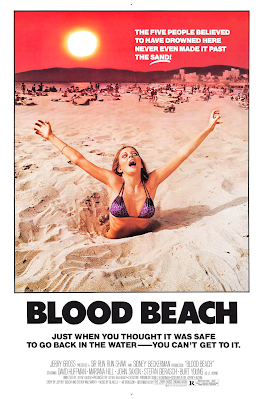 Posted by shutteredroom at 1:17 AM