It's the Big One! Over thirty pages of the book, and taking in multiple entries under Daemon, Demodand, Demon, Deva, Devil, Dinosaur and -of course- Dragon.

I'm breaking it down into sections.

Filling in the Neutral Evil gap between Demons and Devils, and slightly cooler than both because they've got that saexy ae in their name. The usual info on slaying them, saying their name, common special abilities and damage resistance.

I feel like the Daemons were a disparate bunch of Lower Planes monsters that someone thought would be better gathered into a group. There aren't any obvious connections between them, and the Arcanadaemon seems more like a Devil to me with its horns, humanoid body, red-iron forts and baronies.

Based on formative Alignment studies, I decided Daemons were purer Evil than either Demons or Devils, because Evil was more important to them than Law or Chaos.

Became Yugoloths in 2nd edition, although 'daemon' did appear in the Monstrous Compendium prior to Planescape. This is still quite a cool name. And they were 'evened-out' a bit, presumably to make them a more coherent group.

Their Magic Resistance is different to the Magic Resistance for everything else - it starts from a more logical 1st level, rather than 11th. Most have significant Pluses to their HD (x1 to x4 their HD), to the extent that I wondered if some were typos and should be number ranges (3-9 rather than 39, for example) - they seem to be the only monsters across all three AD&D bestiaries (MM, FF, MM2) to have such high adds.

Horned, dog/jackal headed, wearing robes, and it's a spell-caster (11th to 18th level) with psionics.

Nice detail that they live in red-iron forts containing portals to the Prime Material Plane.

Big disappointment - my Charon is the Ray Harryhausen one from Clash of the Titans, and the one that accepts a couple of coins, none of this 'silk bag of 100pp' business. I guess I'll go and stat my own, then.

It's interesting that his attention can be attracted by casting certain apparently unrelated spells, and I like the idea of him turning up unannounced and asking "Where do you want to go?"

Charge more reasonable rates than their boss. Use one as the Charon so lower-level adventurers can join in the fun. 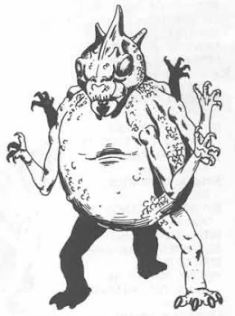 Because there isn't much (any) detail on how they live, there's no real feeling for the Derghodaemon as a monster - they're a statblock with abilities and an illustration.

For some reason, I've always thought this would be better as a clockwork/mechanical monster, a construct rather than a daemon. That might be the multiple arms and 360 degree rotating head.

Strip out the daemonic abilities and bring down AC & HD; maybe even fill it up with something dangerous (like for Golems and Living Statues). Any gems that were meant to be in the daemon's gizzard/stomach are now decorative inserts or eyes.

Supposedly the only creature that does not lose its memory when in contact with the River Styx - implying that everything else, including Charon and other unique powerful beings, would. In fact, it seems possible that Charon and the Charonadaemons would be losing their memories on a regular basis, maybe multiple times per day. 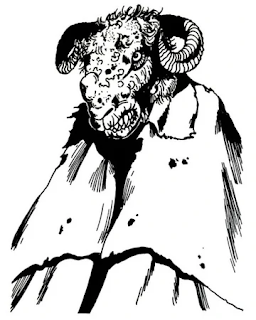 I don't know what the title might mean - oinos apparently means 'wine' but I don't know how or why that would apply here.

He causes disease by touch, has a transfixing gaze, and wields a staff of office (which I imagine as a fancy walking stick) with the powers of beguilement, geas, mass charm and to grant another's wish. No mention of charges or daily limits, but it works on other daemons (and possibly other monsters immune to charm). He's got psionics, too, and uses them to turn lead into platinum - which has a nice occult, demon-y feel to it.

My favourite thing about Anthraxus, however, is that he wears a 'rotting grey suit and cape', which I always see as being a modern suit with waistcoat, so he also wears a pocket square, tie, and watch-chain. I imagine him to be one of the few monsters capable of breaking the fourth wall, and might even carry a concealed revolver.

Cthulhuvian-looking fellows, these. Reskin slightly (they're not Daemons anymore) and put them to work for Mi Go or Mind Flayers.

They seem like a pretty solid choice for a guardian daemon. As Piscoloths, they get a significant upgrade in Planescape.

If you look into its huge eyes like fire-opals, you must save or stop fascinated. But even if you make your save, you 'will not see the ultrodaemon but someone loved or respected', getting the encounter off to an interesting and unusual start.

The Ultrodaemon statblock and description is fairly economical (three paragraphs). Its most ostentatious special abilities are wall of fire and blade barrier, but the rest are charms, illusions and detection, as well as symbols of persuasion, insanity and hopelessness. With magic jar and the possible ability to summon monsters/characters from the Prime Material Plane, you've got a nemesis around which you could spin an entire campaign.

It has a massive giant arm (Storm Giant) and a normal human arm.

It's got a signature weapon - the tol-kendar (body-wrecker) - through which it can direct its shocking grasp ability.

And it can drain your XP, hp, psionic power points, and Ability Scores after it's knocked you out.

About the only thing I find interesting is that they dwell in the Great Dismal Delve - which they've spoiled for me by dwelling there.

There's no other 'Death, comma' monster in MM, FF or MM2 - I've checked the index - so why not call it Crimson Death and take some weight off D?

For a 13 Hit Dice Genius it doesn't seem to do much more than hang around in a bog waiting to drink adventurer blood. Even using the treasure of its past victims to bribe or lure new ones doesn't seem especially clever.

However, as a vampiric elemental or a Gamma World-esque hazard from the technological past or something called down from the stars on certain nights of the year it works quite well - I suppose don't try to overthink it.

I get it - the Demilich is a special part of D&D history and was made for a specific reason.

Not knowing that, on my first reading, it just seemed like an unreasonably tough and deadly monster that says a dozen different ways that it can kill you and you can't kill it. And mentions 'soul' more than any other bit of D&D text I can recall.

It's still a great basic concept - undead so dead that it's just bits and pieces but powerful.

All three share a number of common characteristics and abilities, but are otherwise another group of evil Lower Planars. 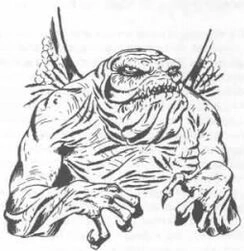 I like that that the Shaggy Demodand isn't furry, but has baggy skin.

And to a UKian, the Slime Demodands being 'the middle class of Tarterus' rings differently than it was intended.

Posted by shutteredroom at 9:32 PM